Warning: "continue" targeting switch is equivalent to "break". Did you mean to use "continue 2"? in /homepages/26/d757526286/htdocs/ICASMYSURU/wp-content/themes/Extra/includes/builder/functions.php on line 4993
 Journey from Grahas to Nakshatras A macro to micro analysis of horoscope | ICAS 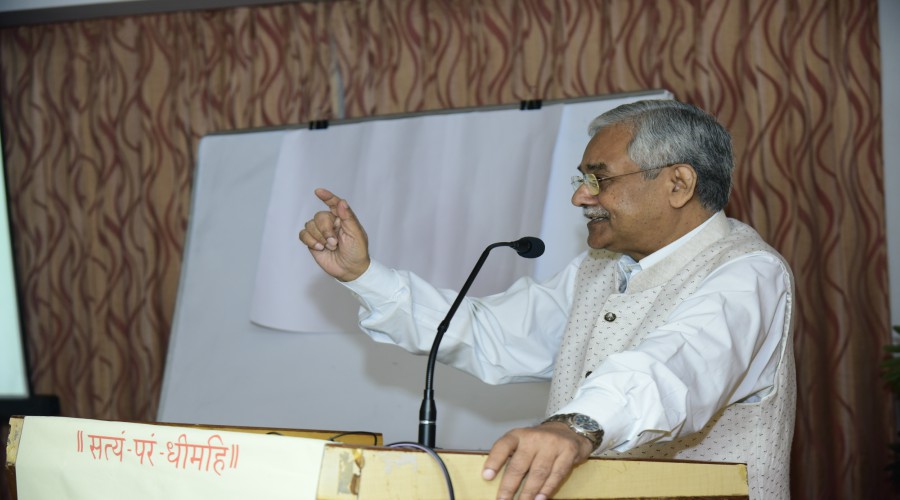 A macro to micro analysis of horoscope

Sri A B Shukla, IAS (Rtd), Hon National President of Indian Council of Astrological Sciences (ICAS) delivered a day long lecture on Journey from Grahas to Nakshatras on 7th October 2018. The programme was organised by ICAS Mysuru Chapter as part of Jyotish Geeta Series that Sri Shuklaji is conducting since 2013 in Mysuru. The programme was well attended by 78 participants from Mysuru, Bengaluru, Chennai and New Delhi.

The primary aim of this lecture was to enable the participants to detect the potential promises and problems in a horoscope. Sri Shuklaji did this admirably by focusing on two pivotal points of horoscope analysis that he has unravelled by his meditation upon Bhagavadgeeta, Upanishads and works on Tantra and Jyotisha. These two pivotal points are:
1. Role of Anurakta Graha
2. Role of Ativarti Nakshatras
People who have heard Sri Shuklaji are familiar with the Central Point of Previous Life (CPPL) which he extensively uses to identify the vasanas that one carries from his immediate past life. This concept is derived from the Bhagavadgeeta and in line with the substance of this concept he has renamed it as anurakta graha. Through example charts it was shown how anurakata graha brings ups and downs in a native’s life. It is very pertinent to note that by neglecting anurakta graha’s role it will not be possible to explain the ups and downs the native faced in his life – both personal and professional life.
He also taught about the role of planets play if they are placed in ativarti nakshatras. Based on avakahada chakra and tantra works like Brahma Yamala and Rudra Yamals, the ativarti nakshatras have been identified. The word ativarti means that which surpasses. Based on a verse from the Bhagavadgeeta, Sri Shukla explained that the word ativarti also means that which surpasses the normal behaviour. In this case, planets placed in ativarti nakshatras break normal from their normal behaviour and influence the native’s life in a very special manner – whether good or bad. He said that, avakahada chakra points to the special role played by the nakshatras – ardra, hasta, poorvashadha and uttarabhadrapada. Once again this was explained by way of example horoscopes. It was also shown how the ativarti nakshatras can be used in horary.
While synthesising the role of these two pivotal points of horoscope Sri Shuklaji noted that planets have bhava and this bhava has prabahava (influence/impact); because of this prabhava, abhava (deficit) arises giving rise to svabhava (nature) of a person. As any student of astrology knows, rebirth happens because of the abhavas felt in the previous birth. If a person has no abahava then it will culminate in salvation. Hence the anurakta graha gives vital clues as to the primary purpose of present birth of a person. If this is analysed in relation with other key planets of a horoscope then it provides deep insight in to the working of Nature.
Abhava a person experiences may be worldly or spiritual. If this deficit is rightly comprehended, then the reading of horoscope will yield rich results. It is also relevant to note that the ativarti nakshatra invariably shows the deficit related to worldly matters. In the final leg, a synthesis of both anurakta graha and ativarti nakshatra was demonstrated by way of example horoscopes.
Earlier in the day, Sri Shankaranarayana Jois, a renowned teacher of Samskrita, yoga and upanishads spoke as Chief Guest of the function. He lucidly presented the idea that planets only indicate but not decide and we should learn to identify the planets within the human body. He appreciated the efforts of ICAS in promoting astrology and admired the rich educational base of the organisation.
A special mention should be made about Sri Ashish Sharma, OSD to the National President and Assistant Controller of Examinations, ICAS. He seamlessly integrated the powerpoint slides with the explanation/lecture given by Sri Shuklaji. We wish to place our thanks to for his coordination and commitment to the cause of jyotisha.
Sri A B Shuklaji conferred the title of Jyotish Kalamani on Dr Soumya Kumar, Editor, Publications Division of ICAS and member of Academic Advisory Committee. Sri B S Arun Kumar, a fine teacher of judgement of bhavas, Tajika and Medical Astrology and and Sri Jayasheela Bhat, a witty teacher of mathematics who makes learning all calculations related to planetary positions and shadbala a fun, faculty members of Mysuru Chapter were conferred with Jyotish Vachaspati title.
The programme started with the recitation of Medha Sukta by Ms Chitkala S Sharma followed by group singing. Sri Subramanya R Tantri, Chapter Chairman welcomed the President and guests. Sri Ravindra Bhat, Secretary proposed the vote of thanks. Participation certificates were distributed to all the participants along with the convocation for our alumni by Sri Shuklaji. 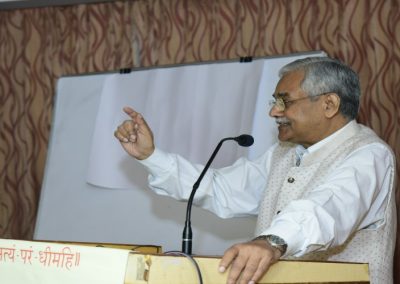 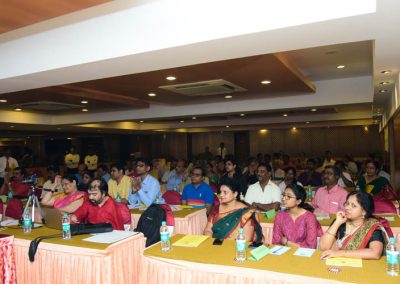