Warning: "continue" targeting switch is equivalent to "break". Did you mean to use "continue 2"? in /homepages/26/d757526286/htdocs/ICASMYSURU/wp-content/themes/Extra/includes/builder/functions.php on line 4993
 Jyotisha Dwara – Gateway of Jyotisha Invited Lectures by Smt Gayatri Devi Vasudev at Mysuru | ICAS 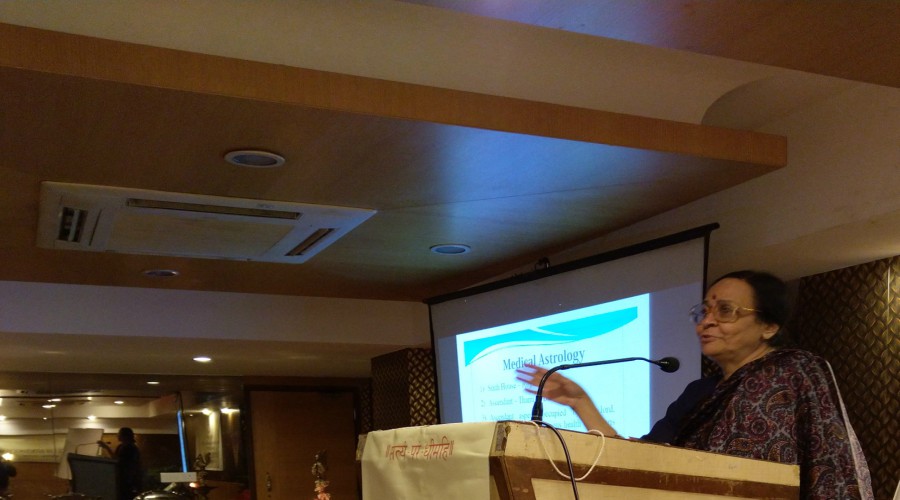 Invited Lectures by Smt Gayatri Devi Vasudev at Mysuru
Smt Gayatri Devi Vasudev, Hon National Vice President of ICAS and Editor of Modern Astrology delivered lectures in a function organised by the Mysuru Chapter of Indian Council of Astrological Sciences. The Invitation Lecture was aptly named as Jyotisha Dwara by Smt Gayatri Devi, as she spoke on the two primary pillars of astrology.
She spoke on Ascendant: Foundation of the Horoscope and Moon as an Index of Spirituality for more than five hours on 15th July 2018 in Mysuru. It was an intellectual treat to the large audience who had gathered to hear from Mysuru, Bengaluru, Shivamogga and Secunderabad.
Smt Gayatri Devi started her presentation by noting that basic principles of astrology as laid down in classics take us a long way in understanding horoscopes. She proudly recalled that Dr B V Raman did not keep any secrets with him and all that he knew has been published in the form of articles or books. Unless we properly comprehend the strength of ascendant, it is not possible to analyse a horoscope, she said.
To appreciate the promises hidden in a horoscope a good starting point is veeryotkata principle propounded by great astronomer Varhamihira. The principle highlights the role of ascendant lord, Jupiter and Mercury in particular in the strengthening of a horoscope. If ascendant is aspected/occupied by these three planets provides success, opportunities and general happiness. Flourishing life of the native is by and large assured. If this is not available then it makes for a weak ascendant leading to lack of happiness, elusive success. Interestingly, Varhamihira does not give the same importance to Venus as seen in other classics, she noted.
The veeryotkata principle was richly illustrated with the help of carefully selected set of horoscopes. It was an assorted set of highly successful individuals and those not so successful to persons who had to undergo sufferings. Smt Gayatri Devi instead of taking up a series of linear cases, judiciously made a comparative study of selected horoscopes. This made her teaching more exciting and intellectually challenging to the audience. She amply demonstrated how the results change because of occupying or aspecting from different bhavas. Another aspect which she validated was the modification to veeryotkata principle due to close conjunction/aspect of ascendant lord with a malefic or the effects of planets being in cuspal degree.
It was very engaging to see her establishing the utility of veeryotkata principle and health of a native. She showed the utility of astrology in deciding the line of treatment, as an aid to diagnosis and helping the patients both financially and mentally; and of course to help them recover their health. The examples she presented exhibited her knowledge, experience and conviction in astrological principles.

In the second session Smt Gayatri Devi dwelt upon the relationship between Moon and spiritual growth of a person. Once again her teaching was richly illustrated by a number of horoscopes drawn from different areas of life. Power of Moon based on the gunas of planets associating with and how they decisively influence the mental stability of a native. Association with malefics can lead to sudden growth and downfall and more interestingly how association with malefics colour the spirituality was explained with examples. Drawing from Srimadbhagavadgita, she enumerated the qualities of a saint and a demonic person.
One thought-provoking idea she submitted was that of paisacha yoga, formed by the association of Moon and Mercury. Cautioning about the indiscriminate use of this yoga Smt Gayatri amply demonstrated how this yoga can lead to demonic personality or given right conditions can transmute it in to a daivamsa yoga. Combinations for becoming a sannyasi or leading an ascetic life were enumerated from classics.
It is worth recalling Dr Raman’s guideline that one should not rely on just one principle but chart should be seen in its entirety. The tattvas and significations of signs and planets bring in qualitative changes in the behaviour of planets should not never be forgotten she emphasised.
The day also found Smt Gayatri Devi explaining the innovative attempts she has made in the field of prasna or horary. Many cases from her diary were recollected along with the rationale for her predictions. It was exciting to hear her on how the relation between ascendant and karaka planet can give vital clues about a lost article or which house should be considered for article. She also clearly elucidated the reasons behind Dr Raman’s stance for considering cutting of umbilical cord as the time of birth. Quoting from Sage Satyacharya she explained that classically laid down principles cannot be followed today. Her emphasis was on being pragmatic rather than being dogmatic about either scriptures or even modern science.
It was a very lively day of lecture, questions, answers and possibilities of astrological analysis in different scenarios. Earlier in the day the program was inaugurated by lighting of the lamp by Smt Gayatri Devi Vasudev and Sri Narayanagowda, Presdent of Mysore Hotel Owners’ Association. Sri Narayanagowda said that without astrology all the important events of our life will lose its meaning. Sri Jeyaram, Hon National Vice President of ICAS was present. Sri Subramanya Tantri, Chairman of ICAS Mysuru Chapter welcomed the gathering. The program ended with a vote of thanks by Sri Ravindra Bhat, Secretary. 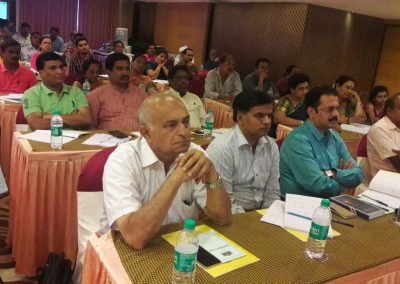 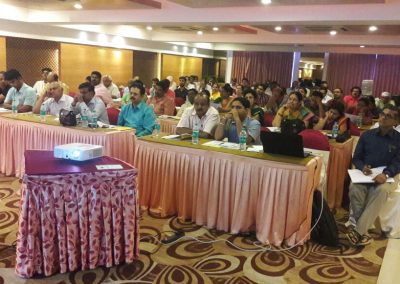 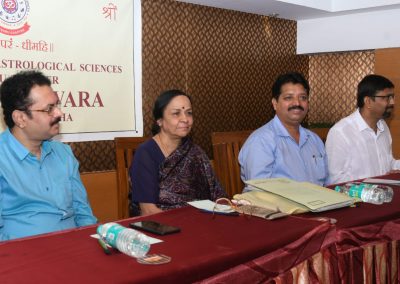 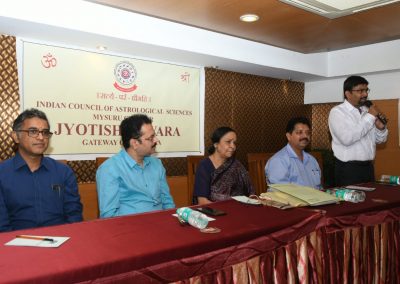